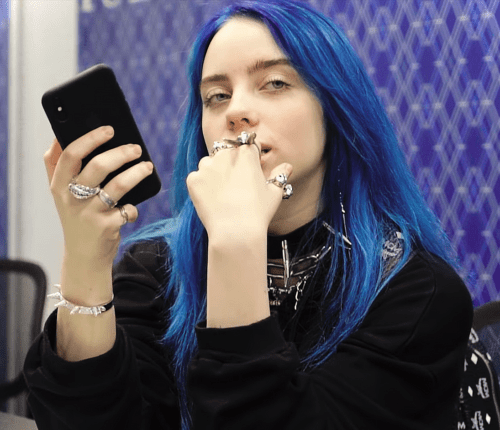 While cementing her place as one of the biggest names in the music industry in recent years, Sh’es been known to use her platform to speak out on environmental causes.

Billie Eilish has ventured into yet another fashion partnership with fashion brand H&M for a collection aimed at eco friendly clothing.

The 18 year old “Everything I wanted” singer has released another fashion collaboration, the line is targeting sustainability.

The range of clothes are made from 100% sustainable materials and are a collection of pieces inspired by Eilish’s signature look. The range is made up of baggy t-shirts, bucket hats and oversized sweaters with every item emblazoned with her logo.

Eilish, like many celebrities has become more and more outspoken about the fight against climate change and sustainability. She and Woody Harrelson have recently released a public service announcement video titled “Our House Is On Fire,” which details ways people can live more sustainable lifestyles. The video message was broadcast an episode of Saturday Night Live which featured Elish. Before previous concerts, she also gave fans free gig tickets if they pledged to do their best to fight global warming.

H&M have collaborated with other artists to launch merchandise. Celebrities like Shawn Mendes and Ariana Grande have also branded lines, however, Billie is the first celebrity to make her line sustainable.

“We’re super excited about this merch collection drop,” says Emily Bjorkheim, head of design for Divided, H&M. “Billie Eilish is obviously an inspiring artist but also someone a lot of people around the world admire for her personal style and empowering way of expressing her values.. We want to enable her fans to step into her world and feel empowered to freely express their style as well.”

“Billie Eilish is clearly an inspirational performer, but also someone a lot of people around the world admire for her unique style and empowering way of spreading her values,” she added. “We want to enable her fans to step into her world and feel empowered to freely express their style as well.”

In late 2019, the young singer explained how she was planning on making sure the upcoming “Where Do We Go?” world tour to be as ecologically friendly as possible, by barring plastic straws, asking fans to supply their own reusable water bottles and having plenty of recycling bins accessible in each venue.

In 2019, Eilish’s signature baggy sized outfits and fondness for the colour green saw her make the top of Google’s Most Googled Style list, so it’s a safe bet we can expect a similar vibe for the singer’s H&M merch, all of which is made from sustainable materials.

H&M states in a press release. Every item in the collection has been made using materials that have been “sourced in a more sustainable way”,

It is available to purchase worldwide from all H&M stores carrying the Divided concept and online at hm.com.

Emily Bjorkheim, H&M’s head of design said “Billie Eilish is obviously an inspiring artist, but also someone a lot of people across the globe look up to for her personal style and empowering way of expressing her values,”.

“We want to enable her fans to step into her world and feel empowered to freely express their style as well.”

3D make-up artist Ines Alpha who worked on the collection’s launch campaign, creating delightful visuals that have been turned into an exclusive Snapchat filter.

Billies collection features long, boxy T-shirts, hoodies, sweatshirt dresses, joggers, and T-shirt dresses in Eilish’s signature green, as well as cream, black, and pale green. According to a press release, Alpha created the graphics for the campaign imagery, using “surreal 3D elements” that resemble paint splatter. She also made a custom Snapchat filter with the same splattered look for shoppers to play with — while wearing the merch, of course.

“For the H&M Billie Eilish merchendising campaign, I wanted to work with liquids from another planet, floating around the models and bringing colours and fun to this augmented world,” the artist said.